I haven’t had an AR-15 in my safe in over a year. In fact it’s probably closer to two years since I shipped the last one off. This summer I figured was the right time to get back into the game. Prices were dropping, and there was lots of stuff available on both sides of the border.

But I decided I wanted to try building an AR. If not from scratch, then at least a “baby’s first build.” So I jumped on the SFRC stripped lower special and started hunting for parts. Six months later, I have a gun: 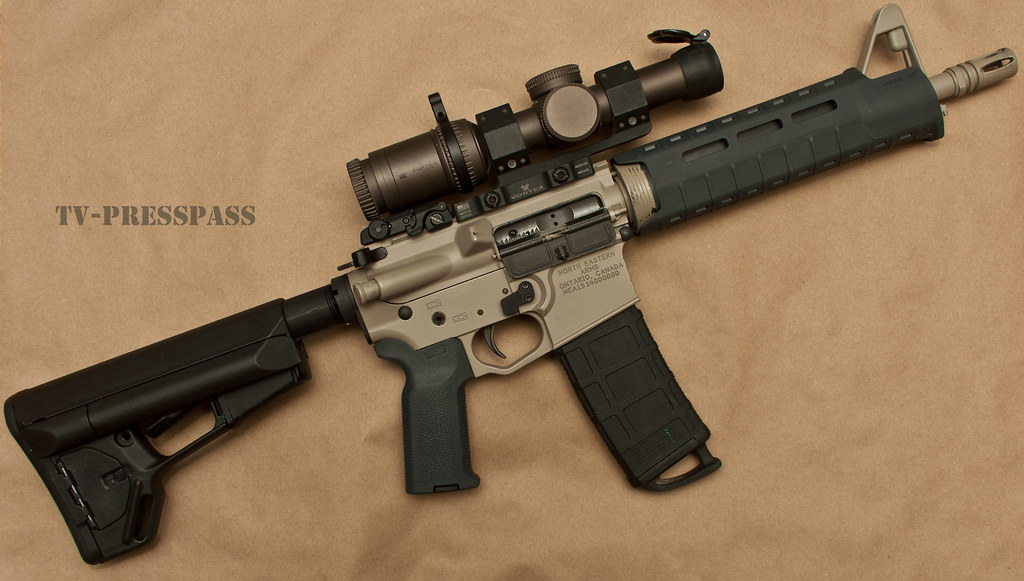 All in, I spent $604.21 on the gun you see above. (I didn’t factor in the Razor and rear MBUS with that. Sights are separate in my book.)

The beauty of this is that I didn’t end up with a bunch of take-off parts. My gear closet didn’t fill up with another damn A2 grip, another carry handle, another stock M4 stock etc. I got all the parts I wanted, kept it cheap, and put some of it together myself.

Between installing the handguards and assembling the lower, I mucked up the krylon job pretty good. I’m giving myself a week to decide if I want to krylon again and how much of the gun I should paint. I wish Magpul made the ACS in grey, but they don’t so I’ve got to make do with my Frankengun.

I hear the LMT and KAC owners saying:
“But TV, your base gun is still that 10.5 inch Norinco. You’ve just put lipstick on a pig!”
Well I shot a 100 yard group with 69gr Federal Gold Match .223 this morning:

This is one pig I’m happy to slather-makeup-on/ride-into-battle. She weighs in at 8.1lbs in the top pictures and a fair bit less without the razor on there. I really can’t think of anything I’d change. . . Well maybe the charging handle, all the CF guys I talk to say the ambi unit is unbearably annoying.

It’s not a fancy AR, but its more complete than you’d get from a regular Norc/DPMS/Colt purchase. And it certainly seems to get the job done.

I’m surprisingly happy to be shooting an AR again.