I’m a big fan of shotguns. I’ve got a soft spot for guns that feed from box magazines.

A flurry of announcements yesterday solidified for me the idea that’s been floating around for years: all of the coolest shotguns in this country and coming out of Turkey right now. They’re doing things that no one else is, making them at an affordable price, and exporting them.

The big reveal is that the RCMP has ruled several versions of the Uzkon BR99 to be non-restricted. Expect to see guns from Trigger Wholesale, O’Dell Engineering, and Corwin Arms all coming out in 2016.

The BR99 is a piston driven semi-auto 12 gauge shotgun that feeds from a detachable box magazine. The idea is to bring the advantages of rifle controls and manipulations to a shotgun platform. The fact that it’s a non-restricted firearm is just icing on the cake. These guns are excellent options in 3-Gun competitions. The simple reload and semi-auto speed are crucial advantages when the clock is on.

Additionally, Trigger Wholesale has confirmed that their AS46 family of pump guns are good for import too. The AS46 are a series of short barrelled box mag guns, offered with a variety of stocks. The big news is that as a manual action firearm, there’s no restriction on magazine capacity for them. Trigger Wholesale is planning on including 10 round magazines, and I’ll bet even bigger ones are a possibility.

Looking at the wide range of interesting things coming out of Turkey, I’m struck by two major questions: First, are they all using a consistently standard pattern of magazine? And two: my Akdal Mka 1919 appears to use a very similar gas system to these new guns. Is it still restricted as an AR-15 variant? I’ll have to wait to get my hands on a BS99 and see how similar they really are.

But even looking past those new guns, the Turks have been sending us cool stuff for years.

I already own an Akdal Mka 1919, the 12 gauge shotgun that is restricted as an AR-15 variant. I’ve also got a SAP-6 in the safe: a compact, modular shotgun with capacity that far outstrips anything else on the market. Yes, even the Kel Tec. With a magazine coupler and 11 round mags, you can be sitting at a full 23 rounds of 12 gauge on and in the gun. 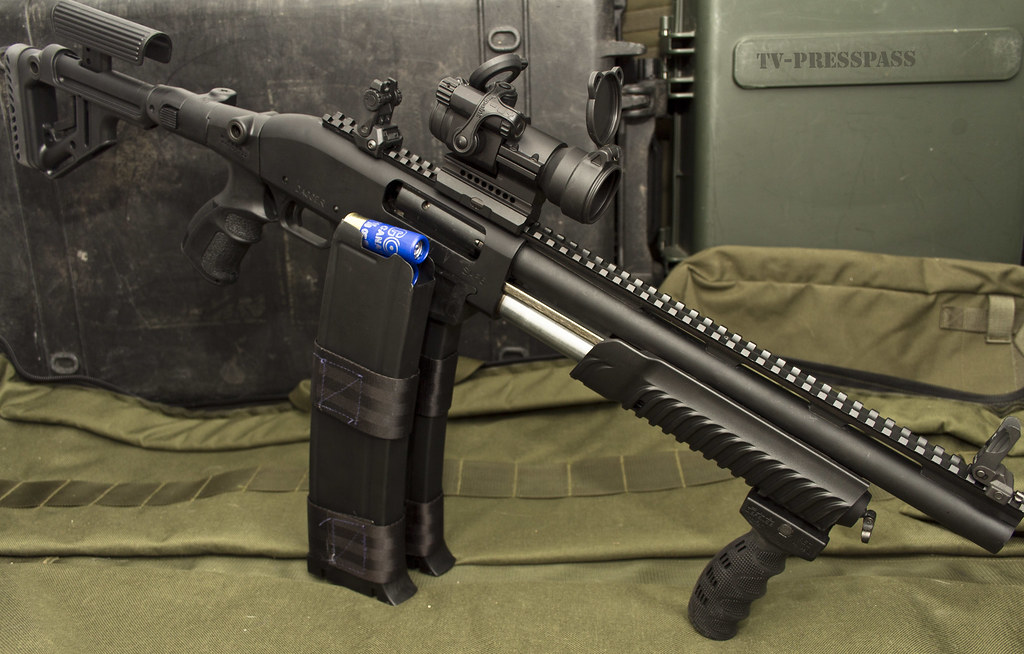 The former Ottoman Empire is also behind the UTAS dual tube pump-gun. Regardless of whether that unusual critter is your cup of tea or not: you have to admit there’s some serious outside the box thinking coming together to make that gun come together. What’s more, it’s got the high profile looks to make it a popular choice in Hollywood. I was pleased to spot one getting eaten in Jurassic World this summer.

The diverse base of manufacturers in Turkey definitely have a grip on the tactical market. Some of their products (specifically ironsights) are a little rough, or a little over the top, but they’re definitely headed in the right direction. I find it interesting that after years of US companies like Winchester selling us Turkish guns with US names on them, that we’re starting to go direct to the source and tap into the wide range of options.

Owners of expensive Italian shotguns often decry Turkish manufacturers as being “low-grade” and compare them to Chinese guns in terms of fit and finish. But I think that’s a massively unfair characterization, and that the range of options and affordable price vastly outweighs most issues of final polish. If I were suggesting a shotgun to a new shooter, I don’t think the old standard of “Mossberg or Remington” applies anymore. Not when you can get twice the gun for half the price.

I’ve got a few in the safe already. But I’m excited to add a few more and see what these new offerings out of Istanbul are like. Digital Trigger: Welcome to the Future

The Cz958: Continuing the Czech Tradition in Canada