My lovely girlfriend Jessica is not an outdoorsy person. But she is interested, willing to learn, and has already proven herself as a capable shot with my handguns and rifles.

I on the other-hand consider myself a dedicated outdoors person. Its not uncommon for me to camp alone, earlier and later in the season than most people, and with only the necessities of equipment.

At the end of August we went into the badlands of Drumheller to hike and spend the night. I thought I’d ease her into the experience by staying in a structured camp-ground where we could park the car and would have a fire pit. I have to confess that I have always considered this sort of camping cheating: where 90% of your home comforts come with you and there’s a convenience store 20 minutes down the road to cover that last 10%.

So I was pleased when afterwards she suggested: “Next time lets go somewhere with less dogs and kids. A little further out?”

That meant going the opposite direction the next weekend: West into Kananaskis Country, leaving the car and hiking down a washed out trail to camp beside a remote creek.

It would be a test for Jess, who had never done truly “on-our-own” camping and a test for some the new equipment I’d picked up recently.

With a few years at Wholesale Sports under my belt, and healthy addiction to gear, there is always new kit coming in and out of my closet. But the new additions this time filled a niche I’d been sorely lacking in: dedicated, full sized rucksacks for heavy loads and long hauls. I wound up with two packs, both from Tasmanian Tiger/Tatonka. Tasmanian Tiger is the military tactical branch of German-based Tatonka, but both lines are manufactured in the same plant.

We loaded and carried the Tatonka Lastenkraxe frame pack, and the  Tasmanian Tiger G82 rifle-transport pack.

I bought a new tent for the occasion, a Asolo Ptarmigan 3, which seems to be one of their better 4 season tents. I’m used to my bivy sack, so this was a big jump up in size and comfort, but also weight.
We loaded the tent, air-mattress, the hatchet and the Cz858 carbine into the Lastenkraxe, which filled it up nicely, and then strapped my 6.5×55 Swede rifle into the G82 along with the sleeping bags, food, water, and all the gear we’d need for shooting.
I gave Jess the Lastenkraxe, and shouldered the G82 myself, with the abysmally heavy 6.5×55. This rifle was traded to me with a Lilja heavy barrel that makes it something of a monster for lightly built guys like myself. But its accurate, and I love to shoot it, so I’d vowed to get it out somewhere wild where we could really put its range to the test.

Unloading the car, I could tell the G82 was more than I was used to carrying, but I’d done worse when putting 4 guns and a pile of ammunition into my Eberlestock Gunslinger II. That load had been so ridiculously heavy I could barely walk with it, and just about put my back out trying to shoulder it the first time.

Jess and I navigated the “road closed ahead” gateway and started down the trail.

It was just under 5km to where I wanted to camp, but after kilometre and a half in, Jess started to have trouble.

The tent was heavier than she’d been expecting, and although I’d fitted the pack on her she felt like it was more weight than she could comfortably handle.

We stopped to consider our options, and I had to confess I was glad to be free of the 6.5x55s weight for a while.
Here is where the modularity of the Tasmanian Tiger kit really came into play, and saved Jess’s first backpacking trip from being a miserable march.
We decided that I would take the Lastenkraxe and that we’d stash the heavy rifle and the G82 in the forest for a bit. Because the G82 is modular, Jess could unzip the front pocket and take just the food as a separate backpack. She would carry the CZ Carbine, while I hauled the tent and gear in the Lastenkraxe. Covering the G82 with a camouflage rain-cover and taking the bolt out of the 6.5×55 meant that we could safely leave the gear hidden off the road and come back for it on a second trip.

With the much lighter Lasternkraxe on my back, it was a pleasant hike till we came to the creek and settled on a spot to set up. After assembling the tent, and making a quick and easy meal of soup heated on a pocket-lite stove, we went back for the G82. Once again, being able to unzip the two side compartments and assemble them into a smaller third pack meant that Jess could take some weight off my back by carrying the water and the shooting gear, while the core of the G82 kept the rifle and sleeping bags on my shoulders.That night we discovered something simple but incredibly handy about the Lastenkraxe: its metal frame allows it to stand upright, even when almost empty. The ability to use this pack almost like a laundry bin while in camp was really quite valuable. Because the Ptarmigan is a fairly small tent, we tried not to put too much extra gear inside. Instead, anything thats underfoot and needs to be stored can be easily dropped in the upright Lastenkraxe, and retrieved again without having to unzip and disassemble anything.

That’s the sort of feature that puts a pack on the top of my “to bring list”, especially on trips that involve staying in one place for a couple of days. Using the upright Lastenkraxe as a free-standing filing cabinet is much easier trying to lean packs against trees and digging through layers of pockets.The Lastenkraxe pack is actually a separate part, with the frame and carry system as the core of the unit. This squared frame is designed to move things that would normally be difficult to carry, like loads of wood or barrels, and I’m looking forward to testing out this more universal carry system.It was reasonably warm for Early September in Alberta. No snow or frost overnight, just an early morning chill and some light dew. I am always cautious of the weather at this time of year. I end up packing a lot of extra warm gear in case things change quickly. For the first time we’d brought along instant-heat gel packs, in case the morning was too cold. I didn’t feel like I needed them, but they were a bit of extra comfort that makes getting up in the morning that much more bearable.

The next day we hiked a little further down the trail to do some target shooting and reload drills. Although we had not brought a day pack, the combination of G82 parts worked as a perfect short term to get the ammo, optics, water and a snack out there with us.

I love hiking, shooting, and camping in Alberta because there’s enough space that you can truly feel on your own. If you’re willing to go a little bit further out, and push that extra mile off the beaten path, you can find some really lovely and secluded spaces. 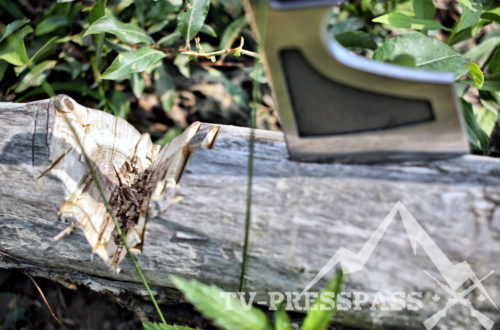